Embrace Awkwardness For The Gospel 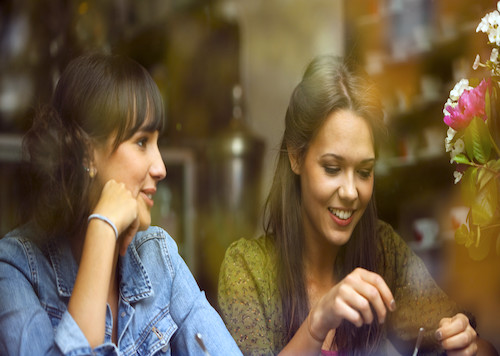 We all try to avoid being in situations that will embarrass us. We avoid taking risks because of fear of being wrong. But what if the only thing holding us back from witnessing miracles was our fear of awkwardness? Embrace awkwardness for the gospel.

I was at the gym and was faced with two choices: I could be a normal person who just minds their own business and leaves the gym like any other day, or tell a complete stranger what God put in my heart to tell them with the possibility of changing their life and witnessing a miracle.

What did I choose to do?

The second choice – I embraced awkwardness.

I was running on the elliptical and a girl came up to the elliptical right next to me. The moment I saw her I felt the Holy Spirit tell me to pray for her because He has a word for her.

I wrote all of this down so that I wouldn’t forget. Now was the time for me to step out of my comfort zone and tell this complete stranger what I believed God spoke to me about her.

Luckily she wasn’t using headphones so it wasn’t too hard to get her attention. I said to her, “Hi, I wanted to ask is your name Marilyn?” She said, “No, but why?”

At that moment I freaked out because I was wrong about her name. I said, “oh sorry nevermind.” I awkwardly went back running and she had left the elliptical to do a different workout.

I told God, “Are you crazy, you want me to look like a fool and chase this girl down?” I had already gotten her name wrong and didn’t want to take the risk of looking more like a fool if the prophetic word I received was wrong.

I debated with God for 15 minutes then decided I was going to head home. But as I was walking out God said something that made me turn back. He said, “If you had sought for a word of knowledge and a prophetic word for this girl out of love and not performance, you wouldn’t care if you were wrong.”

It was in that moment when I realized that this whole time I was caring more about my performance than loving this girl. My fear of being wrong blinded me from seeing the opportunity to show God’s love to her.

I didn’t care at this point if I was wrong. The chances of me being wrong were worth the chance of me being right and seeing this girl touched by God. I wanted this girl to experience God’s love and know that He is real.

I decided it was worth taking the chance of being wrong and awkward.

I turned back to find the girl but thankfully she happened to be walking back my direction. I told her, “Hey, sorry about earlier. Because I got your name wrong, I was hesitant to share with you what God had spoken to me about you. The moment I saw you I felt God tell me to pray for you because he had a word for you.”

The girl looked intrigued, so I went on. I told her how God told me she’s currently in a position of doubting God. The moment I said that she had the most shock look on her face. I asked, “Is this true?” She said, “Yes!”

I kept going and told her the rest of what God had told me. She told me how she was amazed because she’s never experienced this before – how God can tell a complete stranger what was going on in her life and have them say the exact words she needed to hear.

She ended up sharing how she’s actually a Christian but has been doubting God. She thanked me for sharing because it definitely encouraged her.

That night I learned one thing: It’s worth embracing awkwardness for the sake of the gospel.

If I had decided to follow my fears of being wrong or awkward, I would never have been able to witness a miracle of God. And most importantly, that girl would have missed an opportunity to encounter the love of our living God.

I didn’t know what was going on in that girl’s life, but God knew. God loves using us to reveal himself to others.

Don’t let awkwardness stop you from being used by God.

Romans 1:16 says, “For I am not ashamed of the gospel, because it is the power of God that brings salvation to everyone who believes..”

I wonder how many opportunities we have missed out on being used by God because of fear of awkwardness?

There should be no reason not to step out in faith when God prompts us to do so. Even if we are wrong, it’s worth the chance of being right and seeing someone come to Christ.

God has given all of us all the ability to speak a prophetic word to others. 1 Corinthians 14:31 says, “For you can all prophesy in turn so that everyone may be instructed and encouraged.”

This prophetic gift was not only made for certain people, but for all who are in Christ. You are no exception.

The point of the prophetic gift is to draw others closer to Christ. The prophetic is a beautiful gift that allows others to feel known and loved by God.

You are called to do more than preach the gospel, but to also live it in power. 1 Corinthians 4:20 says, “For the kingdom of God is not a matter of talk but of power.” God has equipped us with the Holy Spirit to do miracles that would only prove to others of God’s realness.

Will you step out in faith and pursue the gifts of the Holy Spirit? Do you believe that God can do anything through you? Will you take risks for the sake of the gospel?

We see the disciples in Acts not only preach the gospel, but also display it through signs and wonders. The disciples went around healing, prophesying, casting out demons, and many other miracles. Mark 16:20 says, “Then the disciples went out and preached everywhere, and the Lord worked with them and confirmed his word by the signs that accompanied it.”

We read about the disciples to not only be in awe at their works but to be encouraged to live like them. We are called to share the gospel through His word and live it in power through the Holy Spirit. Jesus tells us, “Very truly I tell you, whoever believes in me will do the works I have been doing, and they will do even greater things than these, because I am going to the Father.” (John 14:12)

God’s plan for you is greater than you know. He wants to use you in ways you cannot imagine. Don’t let awkwardness stop God’s plans to use you mightily. Allow God to use you wherever you may be. He will reveal to you the perfect words to say that will draw others to Christ. The key is love. So remember, embrace awkwardness for the gospel.

Prayer: Lord, I thank you that you love using me to reveal yourself to others.